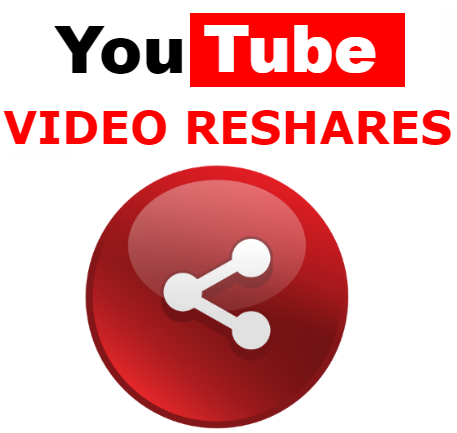 Unlimited+ Social Media YouTube Video Reshares + Views + Likes + More!
In this service, we will add 100+ Reshares to your YouTube video(s).

These are REAL reshares made by REAL people on REAL Social Media sites.

You can get UNLIMITED Social Media YouTube video Reshares as well as views + likes. - They come from Social Media only so much safer!

We can add unlimited reshares, likes, views etc to just one or ALL of your YouTube videos. Helping your videos and Channel to grow more successful!

Why Buy Reshares for your videos?
YouTube has many ways of keeping track of everything that happens on your video. And all these things are analyzed by their hidden algorithm that's been created to work out just how popular and in demand your video is to YouTube users. We know that YouTube doesn't rank videos by just how many views/likes/comments etc they have. If only it was that easy! But it is scored/ranked by how long they watch it, how much they interact with it, and by how many times it's reshared on Social Media sites, blogs etc. Based on these factors, we can now help your video to stand out from the crowd, get ranked up and outrank your rivals in the Search Results!

NOTE: YouTube DOES NOT rank videos by how many views/likes/comments etc they have.. However, like social signals, reshares are a true indicator of how popular your video is on Social Media. In FACT: One of these indicators are Reshares of your video to sites like Facebook, Twitter, Tumblr, WhatsApp, LinkedIn, Pinterest, Reddit, Blogger, StumbleUpon, Google+ etc. Helping your video to rank higher. So in this service, we'll add as many Reshares to your video as you want!

Why Buy This Reshares Service?
What is Required?
Just your YouTube video(s) that's it!
Just simply place your order now and give us your video links.
We'll add the reshares to thhem for you within 12-24 hours usually.

Buyer notes:
The standard service is meant for 1 video.
The minimum reshares we can add is 100 reshares.
There is no maximum amount so we can add unlimited reshares.Order with extra amounts for more reshares to your video or split across your other videos.
You can split across 5+ videos for orders of 500 reshares and above.
You can split more across more videos we can handle small and large orders.
Sometimes reshares can take up to 24 hours to show in your Analytics.

UPDATES:
18/10/18: We can now add geo-targeted reshares!
We added GEO Targeting option for this service for better ranking of your videos in specific Country. You can select which 1 country you want them from when you order from Mix / USA / Canada / UK / France / Germany / Turkey / Sweden / Russia / India / Brazil / Egypt / Australia.

Note: you can only choose either 1 platform or country or ALL (mixed) same for platform too.

For any questions about this service, about the reshares, or any of the extras (views, likes etc) or you need any kind of SEO or promotion for your YouTube videos, check out my other YouTube video and channel SEO and promotion services just send me a message.

Cheers and here's to your success!

Add extras to your order for more YouTube video SEO and promotion!